Slieve Croob or in Irish, Sliabh Crúb – the mountain of the hoof – rises to a height of 534 metres (1755) feet and is the source of the River Lagan. Locally the mountain is known as ‘The Twelve Cairns’. This popular walk begins at the car park at the Dree Hill Road, a few miles from Dromara. Though the beauty of the mountain is marred by the transmitter masts and compounds near the summit the walk, on a clear day, offers lovely views over the surrounding countryside and further afield.

It is said “… on a clear day you could see with the naked eye Lough Neagh, Belfast Lough, Carlingford Lough, Scarbo Tower, the full range of the Mourne Mountains, the coastline from Warrenpoint to County Antrim, and if you knew where to look you could pick out Armagh Cathedral.”

There was once an enormous cairn – probably marking an ancient burial place or place of special significance – on the summit and from this the local name – ‘The Twelve Cairns’ originates. Lewis in his 1837 ‘ A Topographical Dictionary of Ireland Volume 1’ (p.473) states:

“…Among the ANTIQUITIES are two remarkable Carins; one of them on the summit of Slieve Croob, measuring 80 yards around at the base and 50 on the top, and forming the largest monument of the kind in the county: on this platform several smaller cairns are raised, of various heights and dimensions.”

Slieve Croob was associated with the celebration of the Celtic harvest festival of Lughnasa, in honour of the God Lugh. It was one of quarterly feasts of the old Irish year. Lughnasa or Lammas took place in late July or early August. It continued into Christian times as a harvest festival. The festival was often associated with community gatherings on the summits of mountains or hills which gave a commanding view over the surrounding countryside. On the way to the summit the dark blue bilberries – known locally as ‘blaeberries’ – would be picked which gave the festival its local name of ‘Blaeberry Sunday’. It is also know as ‘Cairn Sunday’ as it was said to be a tradition to carry up a small stone to place on the cairn. Once at the summit, an afternoon of dancing, music and games and courtship followed. Blaeberry Sunday was celebrated until the 1950’s on Slieve Croob, and in recent years has undergone something of a revival with an annual walk being organized by local community groups.

Meadow pipits, small brown birds, are often seen dropping like paper darts into clumps of rushes. Hunting kestrels are a familiar sight, hovering or hanging in the updrafts over hill edges with a fanned tail on the outlook for prey. Buzzards are also frequently seen in the area – identifiable by their extended wing tips in flight and large size. A more recent addition are Red Kites which have recently been reintroducted into this part of County Down by the RSPB. Red Kites are distinctive because of their forked tail and striking colour – predominantly chestnut red with white patches under the wings and a pale grey head. They have a wingspan of nearly two metres (about five-and-a-half-feet), but a relatively small body weight of 2 – 3 Ibs. This means the bird is incredibly agile, and can stay in the air for many hours with hardly a beat of its wings.

Follow the road to its very end, passing an interpretative board near the summit. At the end of the road, look up onto the mountain – there are 3 stiles giving access to the summit. The ground here is open mountain and can be uneven and muddy.

The sculpture in the car park is a public art piece created by local artist Christ Wilson entitled ‘Source of the River Lagan’. It consists of slabs of Mourne granite sandwiched together with a window to view the landscape and etched plates representing local heritage in the form of the nearby Legananny Dolmen and the continuation of ancient traditions in the form of the Blaeberry/Cairn Sunday walk.

360 degree panoramic view over County Down.

From the B7 Rathfriland/Moneyslane to Dromara Road at x-road with Finnis Road – take Finnis Road for about 2 miles – the Dree Hill Road is the second road on the left.

From the hamlet of Finnis/Massford take the Dree Hill Road and follow for approx. 2 miles. The Dree Hill Car Park is near the junction of this road with the Clonvaraghan/Finnis Road.

Dogs are not allowed. Permissive access route only – no dogs allowed due to open mountain grazing.

To north – on B7 approaching Finnis/Massford from south – shop and garage. Hamlet of Finnis – pub (limited opening).
To sw of B7: Turley’s bar & restaurant and shop at Dechomet/Lowtown on the B7 Rathfriland to Dromara Road (limited opening).
Shops and pubs at Leitrim & Dromara & convenience store at Moneyslane

Surrounding Area Attractions:
(not on walk route). Photos of souterrian and Legananny Dolmen are included in the gallery.

Located approx. 2.5 miles to the sw is Finnis Souterrain, Carrigagh Road (near Finnis/Massford) – hidden gem – scheduled historic monument opened to the public by Banbridge District Council in 2003. Underground structure dating from c. 9th century – lit by solar lighting. Narrow space – requires bending and stooping to enter. Normally open at all times but prone to flooding after periods of heavy rain so may not always be accessible.

Legananny Dolmen – state care monument – one of the most photographed dolmens in Ireland, located off Dolmen Road. 4 miles (6.4 km) south of Dromara & 5 miles (8 km) n.w. of Castlewellan – tripod portal tomb – has been standing here for around 4000 years. 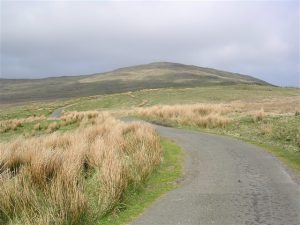 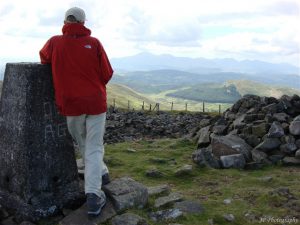 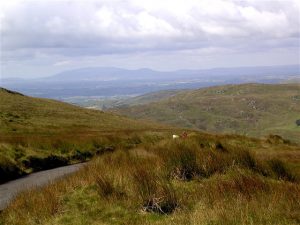 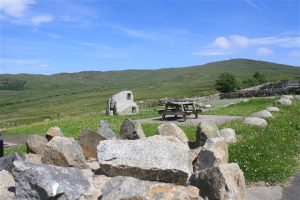