Set on a wild and rugged headland with fabulous clifftop walks and views over Ireland’s North Coast is the Downhill Estate, laid out in the late 18th century by the eccentric Earl and Bishop, Frederick Hervey.

This 2-3 mile walk starts and finishes in the small car park at the western end of Tunnel Brae, Castlerock, adjacent to the black stone gate lodge. Cross the stone step-over stile and proceed along a stone path adjacent to the boundary of the caravan park. Follow the grass path around the boundary of this cliff top headland, known locally as “The Moor”. Take time to enjoy the spectacular panoramic views afforded from this elevated coastal location. In clear visibility it is possible to view the following: Donegal’s Inishowen peninsula to the west; the Giants Causeway and Antrim Hills to the east, and the Paps of Jura, Scottish Isles to the north east. Extra care should be exercised at all times on this headland due to the proximity of severe cliff edges.

It is worth noting that a railway tunnel, approx. 500m long, passes under this headland (Coleraine to L’Derry line), one of two tunnels encountered at this coastal location. The tunnels were excavated towards the end of the 19th Century and are reputedly the longest such tunnels in Ireland.

The walk continues around the headland and then drops down a slope on the right via a well trodden earth and stone path towards the lake at Port Vantage. Care should be taken crossing the dam headwall before ascending the steps through the mature vegetation to emerge on higher open ground on the western side of the gorge. At this point it is possible to visit a low stone built circular enclosure known as Lady Erne’s Seat. It is uncertain whether this structure, built in memory of the Bishop’s daughter Mary, was simply a view point, or whether, with its wind gaps, it served a more utilitarian purpose as a threshing and winnowing floor for dealing with the corn harvest.

The walk follows the line of the stone boundary wall until reaching Mussenden Temple, arguably one of the most iconic and photographed structures along the North Antrim coastline. The Temple, modelled on the Temple of Vesta at Tivoli, Italy, was built as a library and dedicated to the Bishop’s cousin, Mrs Mussenden.

From the Temple proceed along the ‘avenue’ towards the ruins of Downhill House. Take time to explore these majestic ruins and study the interpretation panels provided.

At this point there are two options: (A) Proceed along the grass path in an easterly direction towards the Black Glen and return to the starting point via the ‘escallonia tunnel’ or (B) Head in a southerly direction towards the Mausoleum before entering the Black Glen and returning to the starting point via the Glen and ‘escallonia tunnel’.

Refreshments and toilets available in Castlerock. 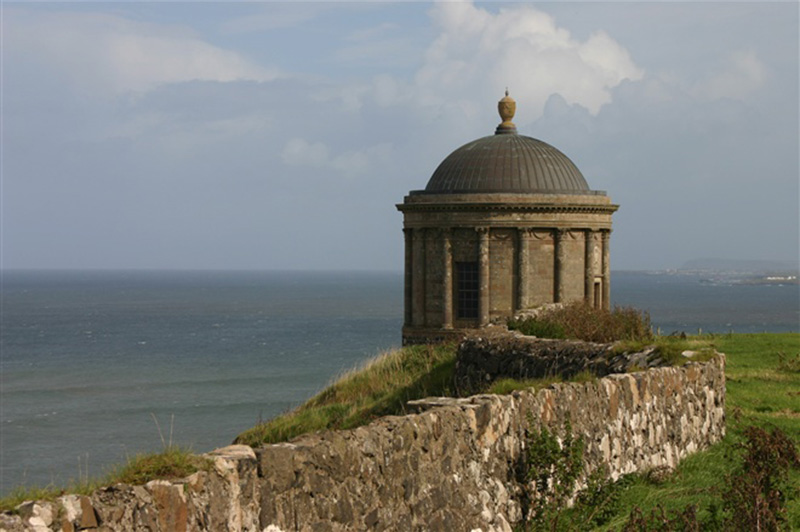 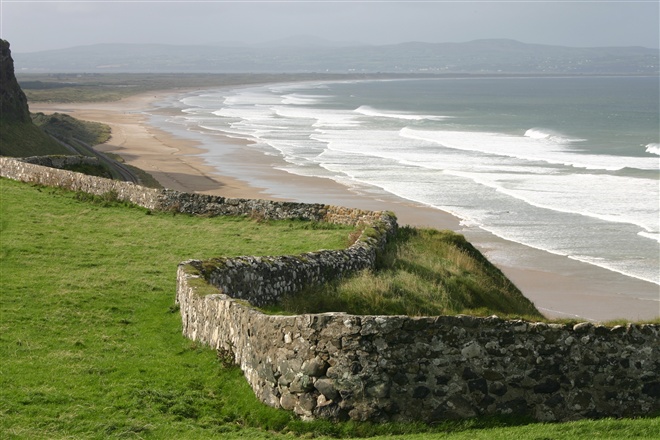