The famous gardens at Mount Stewart were planted in the 1920s by Edith, Lady Londonderry and have been nominated a World Heritage Site. Visitors can walk through magnificent woodlands, viewing the flora and lake, beautiful throughout the entire year.

There are several walks throughout Mount Stewart. This walk takes in the lake and the world famous gardens.

Starting from the main Reception area visitors are directed to the North front of the Mansion. Here a Monkey Puzzle, a very fine Californian Redwood tree and Australian Cordylines give the first indication of the remarkable variety of species to be seen at Mount Stewart. Entering the wide gravelled path past the clipped Bays and between the Beeches planted by Edward VII and Queen Alexandra in 1903, Rhododendrons, Azaleas and Magnolias greet you as you go along. Look out for the Magnolia campbellii planted in the 1920s and flowering for the first time on April Fool’s Day in 1956. Lady Londonderry spotted the magnificent bright pink bloom on the highest branch and thought that someone had played a joke on her but, to her delight, it was the first of many blossoms to appear every springtime ever since.

You have a choice whether to go left or right to circumvent the lake. These directions take you to the left.

As you ascend the rise of the path the expanse of the seven acre lake comes into view. The lake was created in the 1840s by Charles, 3rd Marquess, but the surroundings were not landscaped until Edith, Lady Londonderry’s time. Now the banks are planted with Primulas, Irises and other water-loving subjects, as well as the immensely large-leafed Gunneras. On the left is a most interesting summer flowering evergreen tree, Weinmannia trichosperma, a native of Chile.

Passing the little wooden jetty, you come to a bank with a seat set into a wall. The paved surround here used to be the old horse-pump for the water supply to the house. Proceeding along the lakeside path a popular tree is the Davidia involucrate var.vilmoriniana, known either as the Dove Tree or more usually the Handkerchief Tree because of its large white bracts that hang in pairs from the branches.

A little farther on to your left rises the south facing “hot bank” of Tir N’an Og, Land of the Ever Young, in Gaelic. Described by Lady Londonderry as “not a place of mourning and sorrow but a joyful spot of hope and rest and peace”, this is the family’s private burial ground. Here are the graves of Lord and Lady Londonderry, relatives and friends, guarded by a turreted wall, ornamental gates and statues of Irish saints that gaze across the calm waters of the lake towards the Lough and the Mountains of Mourne. Lady Mairi Bury, daughter of the 7th Marquess of Londonderry and the most recent owner of Mount Stewart, died in November 2009 and is now interred in the private burial grounds. On the slopes of this hill can be found paths and steps running through a variety of shrubs and plants that favour a hotter climate. In Spring the leaves of the South American Nothofagus Antarctica give off a strong scent of vanilla. There are Japanese Maples, blood-red Australian Leptospermum scoparium ‘Nichollsii’, and two olive trees, one grown from seed brought back by Lady Londonderry from the Mount of Olives. Mount Etna broom with bright yellow flowers, and Frank Kindgon-Ward’s Berberis hypokerina from Burma, the silver holly, can also be found here. Lady Londonderry sponsored many of this intrepid plant-hunter’s expeditions to the Far East where, amongst other adventures, he survived impalement on bamboo, a fall off a cliff and a 9.6 Richter scale earthquake. A little bit different from visiting the local garden centre!

Returning to the path at the bottom of the hill you can either follow the lakeside grass path known as the Rock Walk or follow the gravel walk alongside the Jubilee Avenue. Planted to commemorate the Silver Jubilee of King George V and Queen Mary’s reign in 1935, the Avenue’s dominant colours reflect the red, white and blue of the Union Flag, with shrubs such as Rostrevor Embothriums (scarlet), blue potato trees, and blue and white Hydrangeas, red Fuchias and blue Ceanothus. Also here are large-leafed Rhododendrons of the Grande series, a conifer wood and a stream which flows between this area and another path called the Ladies’ Walk. Don’t miss the White Stag of legend – a clue to Lady Londonderry’s interest in Celtic tales.

Following the lakeside path takes you along the natural outcrop of rock with Rhododendrons, Japanese Maples and the Chinese Populus Wilsonii. Two deciduous cypresses turn a bright russet colour before shedding their foliage; azaleas and primulas fringe the waterside. By crossing a little stone bridge over a stream you reach the Ladies’ Walk. Lady Londonderry disapproved of the cairn of stones built from rocks taken from the Giant’s Causeway in 1800 by a former Lady – “a most reprehensible habit!” Much more to her taste is a Japanese Pagoda, which she and Lord Londonderry brought from Japan in 1904.

Turning to the right along the Ladies’ Walk will return you to the mansion house. It was along this original old path that 18th century ladies would take their outdoor exercise; a mile would take them from the house to the old kitchen garden. Here to be seen are Oregon Douglas fir trees, one of the oldest and largest Himalayan Rhododendrons, the red R.arboreum, and a tree known as The Lily of the Valley Tree. To the left rises Rhododendron Hill with several alternative paths taking you through a large variety of Rhododendrons and Azaleas, Birches, Acers, Camellias, Enkianthus and Eucryphias. A good view of the house can be seen before the path descends steeply to the stone vase and north lawns. As you continue along the Ladies’ Walk beside the lake there is a tiny island. Step across the stone bridge and sit for a few minutes in contemplation of the beauty of the lake and the view of Tir N’an Og opposite. This little island has an oriental feel with a Japanese Lantern, also from Nikko, Japan, adding to its tranquil air.

A cork tree bids us farewell from the Lake Walk and the path rejoins the graveled driveway towards the north front of the mansion. In handing over the gardens in 1956, Lady Londonderry noted “Gardens are meant to be lived in and enjoyed and I hope they may long continue to be a source of pleasure to those who visit them…” 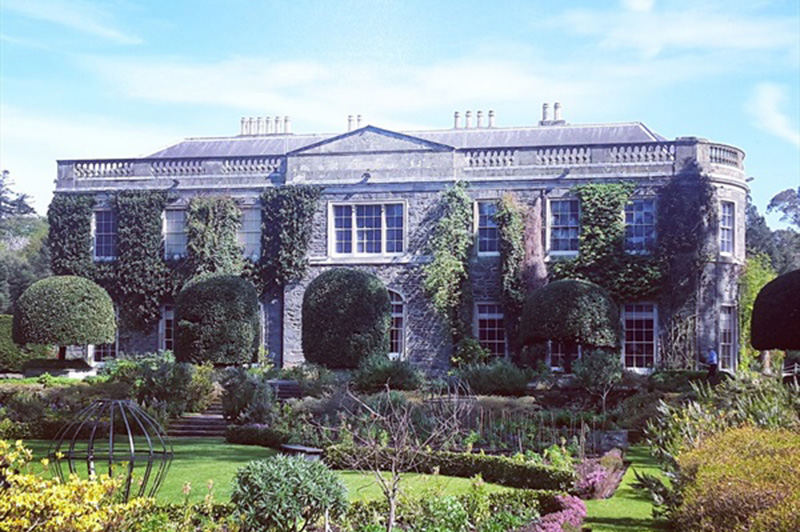 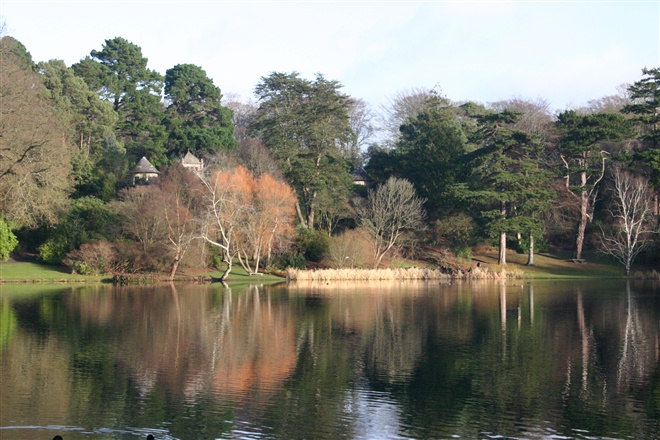 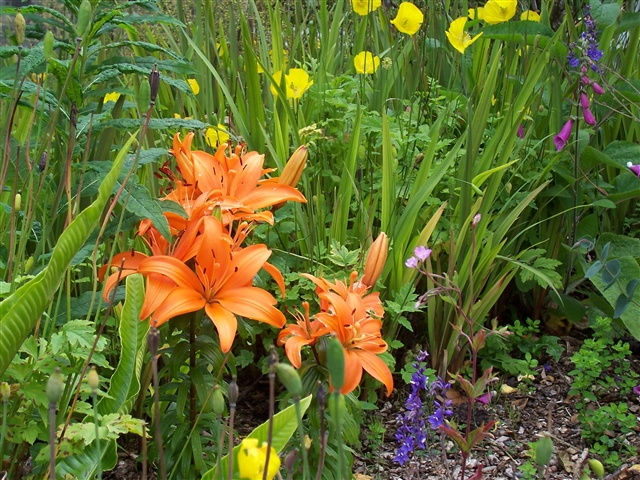 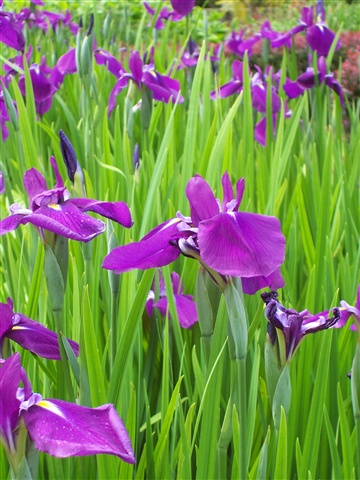 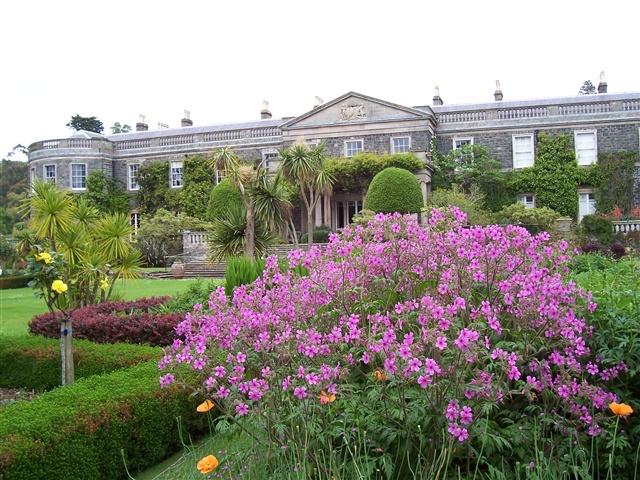 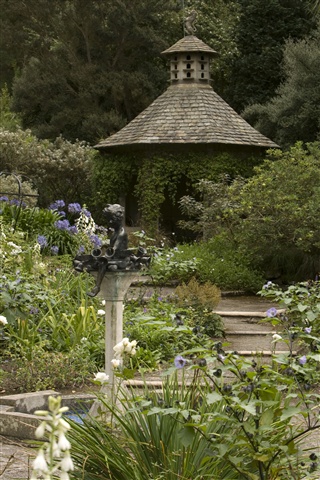 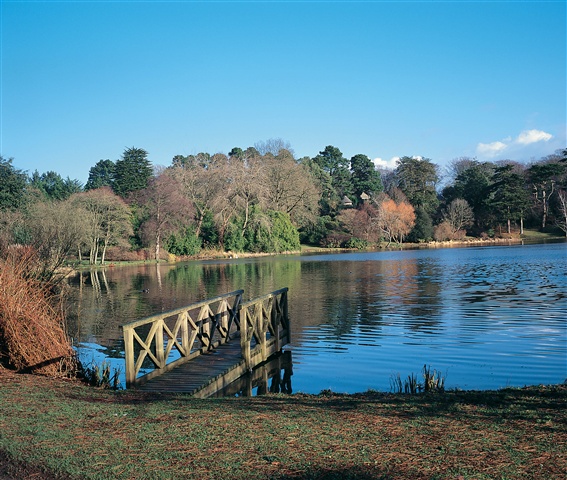 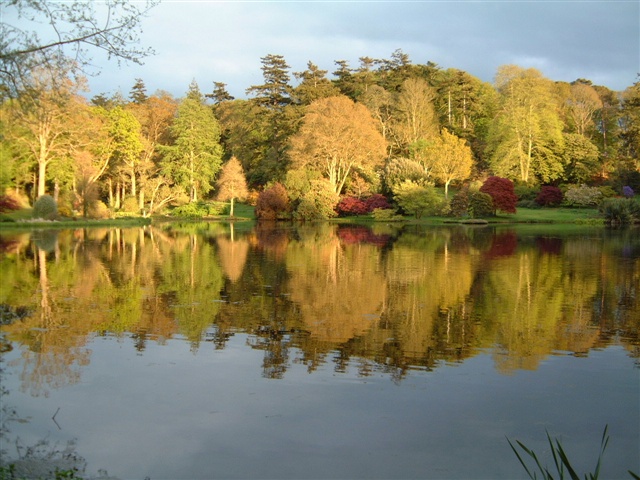 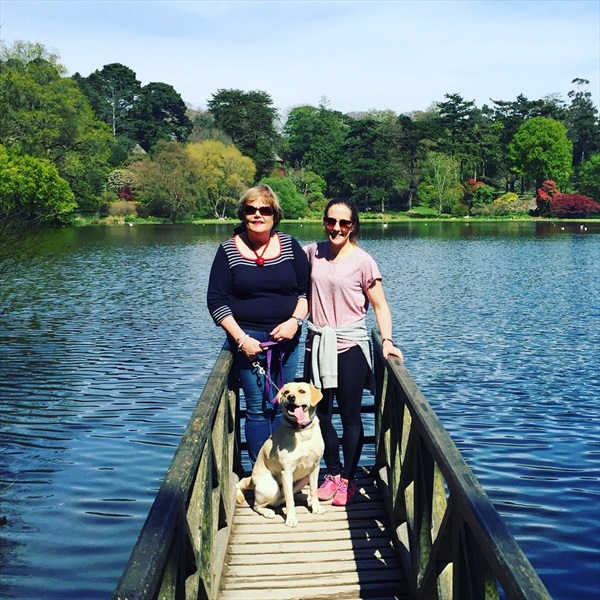 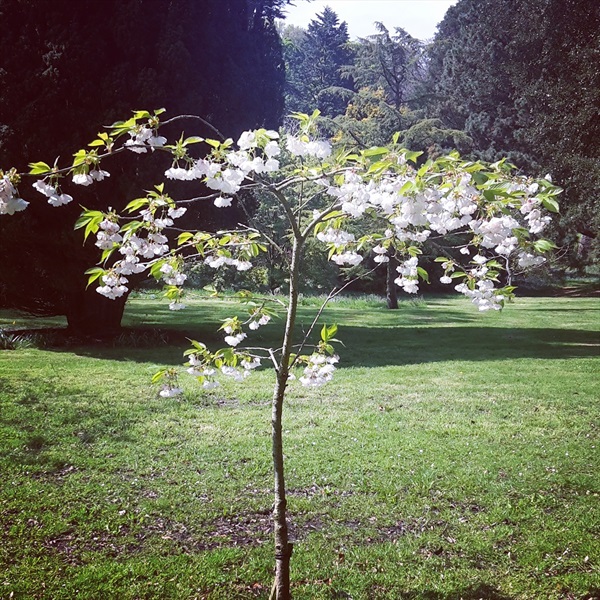 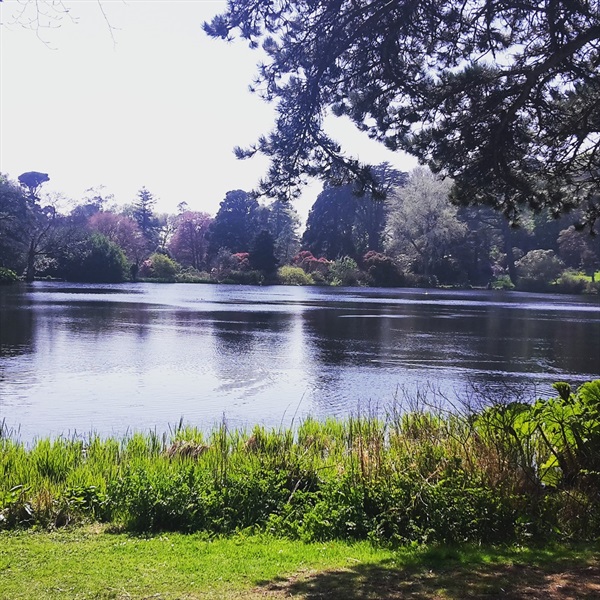 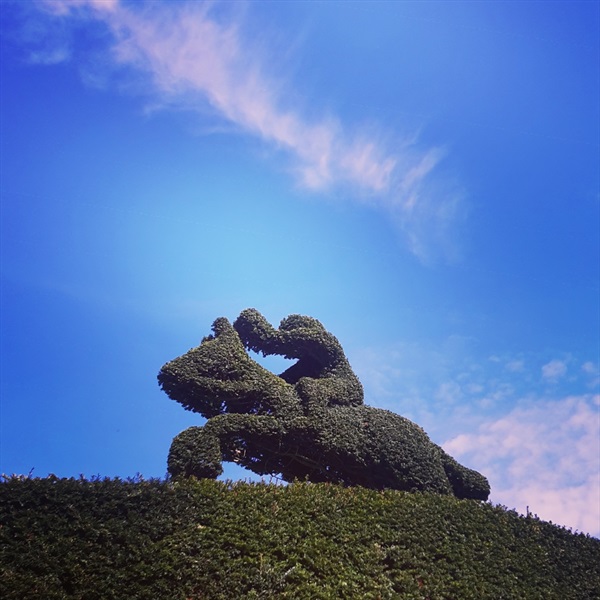