Enjoy a calming stroll among mature Beech and Oak trees in this small area of woodland.  Huntly Wood is a natural haven, an approx. 10 acre wood sited on steep wooded banks between the Huntly Road and the River Bann, Banbridge

In 2006 Banbridge Golf Club kindly granted a 25 year lease to the former Banbridge District Council (post 2015 – Armagh City, Banbridge and Craigavon Borough Council) to manage this area of woodland for public access and conservation and it was offically opened to the public in July 2007. The project was completed with invaluable assistance from Probation Service for N.I. and with grant assistance from Environment and Heritage Service.

The approx. 0.75 mile circular walk follows, for a short distance, the track of the former Banbridge to Scarva railway line along the River Bann before looping back along the upper banks to the starting point at the lay-by.

From the lay-by follow the beaten/surfaced track either to the left, or walk towards the river for a short walk along a section of the line of the former Banbridge to Scarva railway. The railway closed in the 1950s. The walk is circular and will take you back to the starting point.

Located on dry, sloping banks between the Huntly Road and the River Bann this mature, broad-leaved woodland was probably planted as part of works to stabilize the banks when the railway which runs at the foot of the slope, along the River Bann, was constructed. The railway line opened in March 1859 and was acquired by the Great Northern Railway in 1877. The railway closed in 1956.

The upper grassy banks are home to mature beech and oak, a zone of laurel has been contained at the foot of the slope, and beyond the old railway, along the river, is an area of alder. The site has been identified as a proposed Site of Local Conservation Interest under the draft Area Plan.

The cutting was overgrown with laurel and this was cleared to create a walk along it. Little railway infrastructure remained on the site other than the actual cutting, a length of square cut masonary wall and some railway sleepers found here and there. At the southern end of the site – opposite the bench – is one of the old stone built bridge abutments which carried the railway over the River Bann.

The combination of woodland habitat and the retention of old and dying wood is great for mini-beasts on which birds and bats feed. The river banks here form part of the territory of otters and they use it to forage along and to access other parts of their territory. The habitats found in the wood provide good feeding and roosting opportunities for bats – 4 of the 8 species of bat found in NI have been identified in the wood. The majority are Pipistrelle, which can be seen in the early evening between April and Sept. (bats hibernate during the winter). Species identified in the wood and along the river include Soprano pipistrelle, Common pipistrelle, Whiskered bat, Daubenton’s bat and Leisler’s bat. Bats can be seen swarming on warm, summer nights as they feed near the site of the old railway bridge.

The River Bann was integral in the development of the linen industry in Banbridge. Once the banks between the town and Gilford were dotted with linen mills and factories and green fields made white by the strips of linen left out to bleach in the sun. On the opposite bank of the River new housing development has replaced the old mills.

If you would like to report any problems with the route please contact the Countryside Officer at Armagh City, Banbridge & Craigavon Borough Council on
028 4066 0617.

Mature woodland, follows in part a short stretch of former railway line, and view of weir on River

Should be kept under close control at all times.

The F.E. McWilliam Gallery & Studio, 200 Newry Road, Banbridge, County Down, BT32 3NB. Located just off the A1 and opened in September 2008, the F.E. McWilliam Gallery and Studio is dedicated to the memory of the successful Banbridge born sculptor Frederick Edward McWilliam (1909 -1992). McWilliam is an internationally known sculptor of eclectic style – described as ‘An inventor of styles’. He was a contemporary of Brancusi, Henry Moore and William Scott. When he died his executors left his London studio and many examples of his work in different stages to the state with a view to it being displayed in his native town. The studio has been lovingly reconstructed by Banbridge District Council in a peaceful sculpture garden at this small modern gallery which houses many examples of his work.
Admission is free and facilities include a cafe, gift shop and tourist information.
Opening hours:
Monday – Saturday 10.00am-5.00pm
Sunday – (June, July & August only – 1.00 pm – 5.00 pm).

Fergusons Irish Linen Centre :
A visit to Thomas Ferguson Irish Linen offers visitors a rare opportunity to see Irish linen at its various stages of production. These include design, weaving, specialist cutting and hemming and ornamenting. The Ferguson Irish Linen Centre tells the story of linen production through interpretative material. Visitors can purchase products from the Centre’s fabulous linen collections. The Linen Centre is open to the public during the times specified below and no appointment is necessary. The Linen Centre is open as follows:
Opening Times
Monday-Thursday 9.00am – 4.30pm
Friday 9.00am – 12.15pm
Factory Tours
The tour costs £6.00 per person (for 1-2 people), £4.75 per person (for 3-5 people), £3.75 (for 6-20 people) and £3.00 per person (for 20+ people). The tour lasts for about 45 minutes and is not suitable for children under 7 years. Appointments are recommended for tours.
Contact:
Fergusons Irish Linen Centre
54 Scarva Road, Banbridge, Co. Down BT32 3QD
T: 028 4062 3491
F: 028 4062 2453
W: www.fergusonsirishlinen.com

Solitude Park:
Solitude Park Solitude Park is a natural gem in the heart of Banbridge. It offers a perfect place for a break from shopping, a place to stretch your legs, have a picnic, or enjoy the range of events which take place in the park throughout the year or simply to relax and enjoy the tranquillity of the River Bann which meanders through the park.
It covers around 10.5 acres in a central location with access points off Bridge Street, Rathfriland Street and the Castlewellan Road. Banbridge District Council completed a major refurbishment of the park in 2009 and in addition to open space with beautiful mature trees it offers a riverside walk, sculpture trail, a childrens’ play area, event space, canoe steps, picnic tables, themed short walks and small gardens designed to reflect the land use history here of railway and linen mills. Parking and public toilets (off Rathfriland Street).

Banbridge Riverside Walk:
Banbridge Riverside Walk is an attractive linear walk following a surfaced, flat, tree lined route along the western bank of the River Bann out of the town and to a small area of open space and a play area at Huntly – approx. 0.88 mile/1.41 km return. This was part of the line of the former Banbridge Junction Railway which ran between Banbridge and Scarva from 1859 to 1956 and also ran through Huntly Wood.
Join the Riverside Walk at Banbridge Leisure Centre, located off the Downshire Road, a short walk from the town centre. There is ample parking here and a free car park just opposite. There is a café upstairs at the Centre. 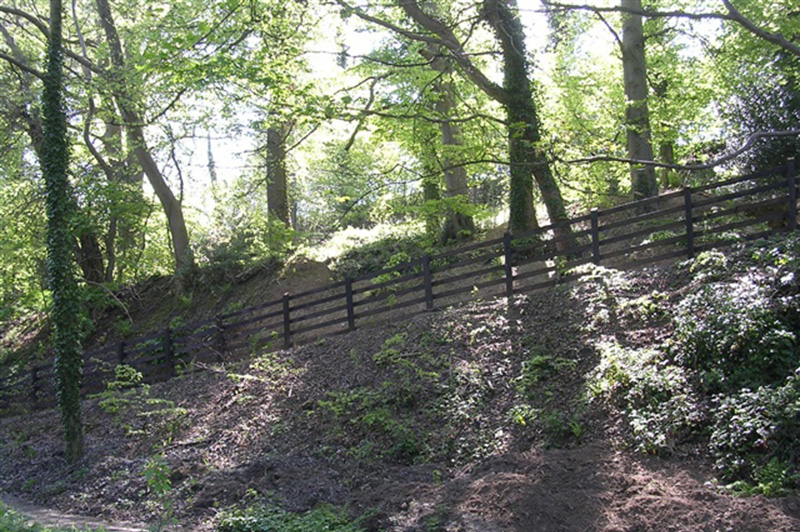 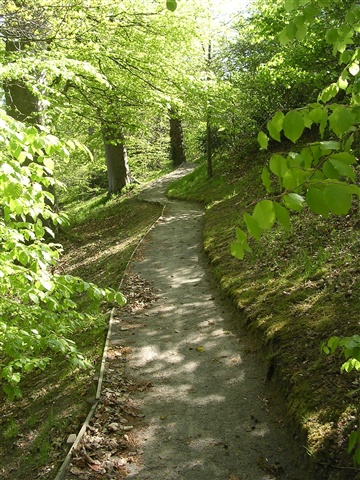 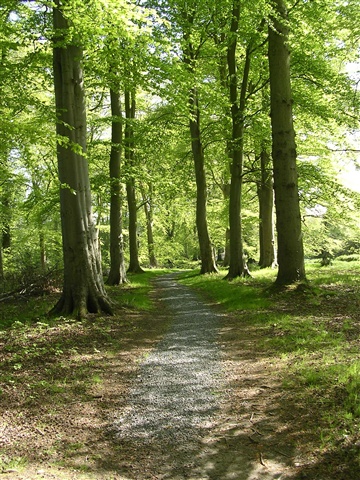 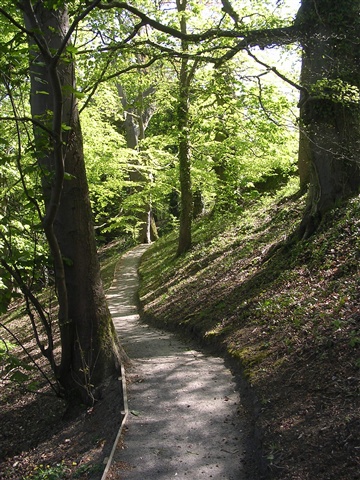 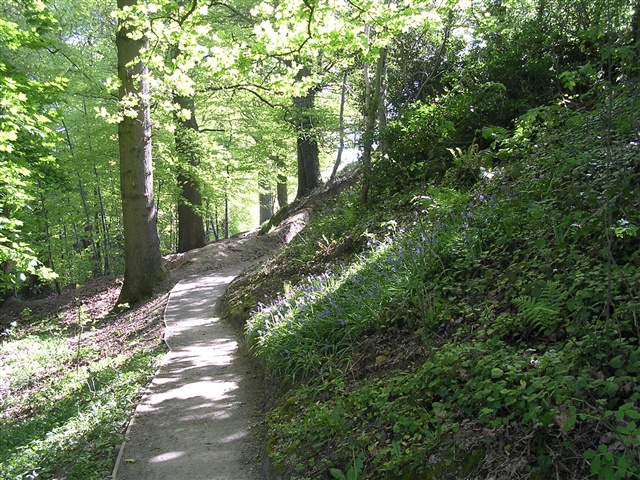 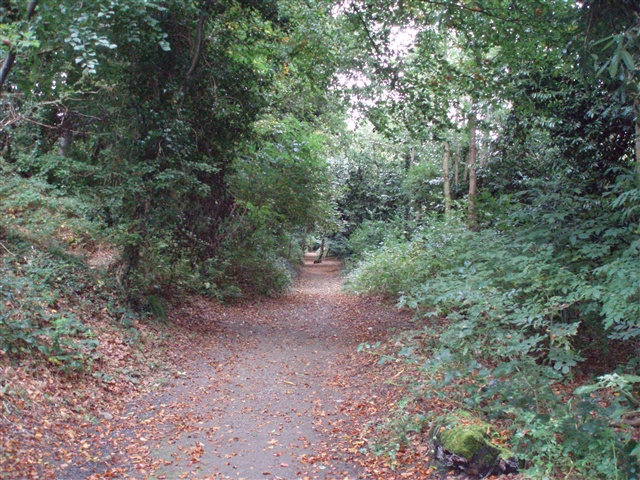 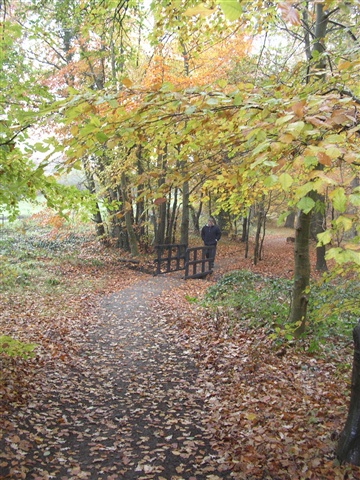 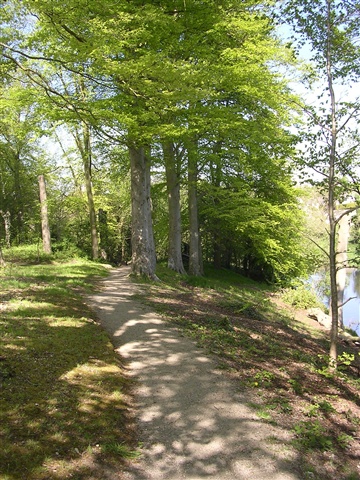