(One review) on “Drumnaph Woodland Trail”

Drumnaph Community Nature Reserve consists of a mix of habitats and three walking trails to choose from. The Woodland Trust owns approximately 80 acres of Drumnaph Wood, which is located to the eastern side of the reserve. This section contains both ancient woodland and newly planted woodland as well as some wetland habitats.

In early 2012 an opportunity arose to secure the purchase of an additional 130 acres in the western section of the reserve, which includes a patchwork of ecological habitats including ancient woodland, wildflower meadows, ancient grazing habitats and wetlands.

The choice of walking routes is detailed on information boards at both car parks.

Terrain Grass pathways are in place

From the western car park, head east and you are now in the ancient Drumnaph Woodland. The woodland is dominated by Hazel, with some large Oak trees and more rarely, Elm trees, most of which have been destroyed by Dutch Elm Disease that has encroached into the woodland over the past 20 years.

You are now on a slight rise where to the north there is an area of dried-out former bog which is now dominated by tussocks of heather and rank grasses. An important plant here as well as other parts of the reserve is the aromatic Bog Myrtle, a small shrub which has long been used to deter biting insects and to flavour foods. Bog myrtle is also used in beer making.

The young woods planted here will form the mature forests of the future. Almost 30,000 native trees have been planted here; mostly Ash, Oak, Hazel and Rowan. Planted in 1998, the young trees have flourished and already tower over walkers.

You have just arrived at a rath which is known by the local people as ‘Lios na Sí’. Just across from Lios na Sí is a modern stone circle. Stone circles are part of our ancient past and remind us of our connections to our ancestors many thousands of years ago. This new stone circle was created by the local community in homage to local folklore. The engraving on the stones reflect the traditions, history, mythology and culture of the community surrounding Drumnaph and the broader area.

You are on a path on the banks of the Griollach River. This area is known as ‘Béal Eochraí’ which means the mouth of the spawning area reflecting the start of the area most used for the spawning Salmon. Spawning usually peaks in December although can occur from November to January. The deep water at the bend here, which has been carved out by the current also acts as an important staging area for Salmon and Trout on their way further upstream. Stony rivers offer excellent habitats for young Salmon which thrive in fast shallow water.

If you look carefully into the trees directly to the south you may just see the ruin of an old house. This is all that is left of a little house which was home to Sally ‘Allen’ Bradley, one of the last occupants of this area. Local tradition tells that many families lived in and around the edge of the woodland prior to the great famine in the 1840s and that they succumbed to starvation, immigration and eviction.

Continue to come upon the fen and ponded area on the reserve. This wetland was drained and almost lost when a stream on the other side of the path was lowered and deepened as part of the Department of Agriculture’s drainage policy. The loss of wetland habitat threatened many species in the area so the wetland was dammed to maintain its higher water levels. The path along the river is, in fact, the dam, with overflow pipes controlling the water level. These dam structures and overflow pipes have saved this wonderful wetland. Indeed, many small ponds and wetlands have been created, maintained or enhanced. These offer an increasingly rare habitat to frogs, newts, dragonflies and a myriad of other plants and animals, which otherwise would have been lost.

You are at the woodland edge, the border between the dark forest and the open countryside. Just before you leave the wood you will notice an engraved limestone pillar. This marks the way to McCartney’s Oak about 200 metres to the south, the largest and oldest tree on the reserve. The fringe habitat on the edge of the woodland is critically important in ecological terms to many of our bird, insects and mammals, especially bats. On warm summer evenings this area is alive with bats feeding on the many flies that drift on the wing along the woodland. As night gives way to day, the bats will be replaced by swallows, martins and swifts who continue to feed on the flies during daylight hours. By taking separate shifts bats and birds can feed on the same food sources, but do not directly compete.

You are at the eastern edge of the Drumnaph Community Nature Reserve. The two fields that lie on either side of the entrance lane to the car park are examples of the diversity of the management carried out here. These fields are very rich meadow habitats and during the summer have a profusion of flowering meadow plants, sedges and grasses that form the base of the local ecosystem.

The natural beauty and wildlife of this ancient woodland

For the west car park, take the Tirkane Road leading north west from Maghera town centre. Continue for 3.5km, before turning right onto the Halfgayne Road. The west car park is 1km along this road on the right hand side.

Dogs are allowed but must be kept under control.

As this is a natural woodland environment, no toilet or refreshment facilities are provided.
New pathways do include a short section suitable for pushchairs and wheelchairs. 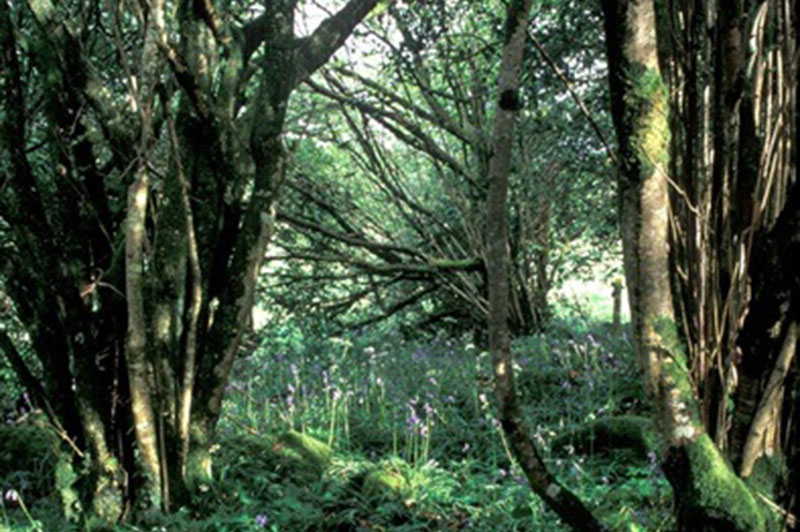