Drumnaph Community Nature Reserve consists of a mix of habitats and three walking trails to choose from. The Woodland Trust owns approximately 80 acres of Drumnaph Wood, which is located to the eastern side of the reserve. This section contains both ancient woodland and newly planted woodland as well as some wetland habitats.

In early 2012 an opportunity arose to secure the purchase of an additional 130 acres in the western section of the reserve, which includes a patchwork of ecological habitats including ancient woodland, wildflower meadows, ancient grazing habitats and wetlands.

The choice of walking routes is detailed on information boards at both car parks.

Terrain Grass pathways are in place

You are now moving through grassland which is typical of the local agricultural landscape. While this area is not as rich in plant and animal species as the rest of the reserve, mature hedgerows offer important habitat for many plants, insects, birds and mammals. However, poor management and removal is threatening many once common species that have grown to depend on them. As you leave the fields you will enter an area of acid grassland and wet flush. This is a very species rich habitat containing species such as Meadow Thistle, an indicator of old longstanding acid meadows. With flowering plants such as Orchids, Lesser Spearwort, Lady’s Smock and Scabious, to mention but a few, this area supports a wide variety of pollinating insects.

You are now looking south across Loch Bran, named after one of the huge mythical hounds who belonged to the Gaelic hero Fionn mac Cumhaill. Today Loch Bran has grown over with mosses, rushes and sedges and is a great example of a transitional mire, surrounded by low-lying bog land. The vegetation is dominated by Sphagnum or bog moss. The build up of moss in waterlogged conditions over many centuries creates peat.

Standing on the hill we look south across Loch Bran bog and behind us lie large areas of whin shrubs. The amount of whin on the reserve is controlled to maximise the wildlife benefit from this important species, while not allowing it to encroach on to other sensitive habitats.

You are now alongside the site of an ancient Rath known as ‘An Ráth Ard’. Half of the Rath has been removed by the creation of the field in which you are standing and the other half remains to the west. On a clear day there are wonderful views from this area. To the east across the lower wood there is the unmistakable shape of ‘Sliabh Mis’ or Slemish, the mountain on which Saint Patrick is said to have been kept as a slave tending pigs. Further north and east the large wind turbines are on the Antrim Hills around Loughgiel. In the far south east you can see ‘Sliabh Crúibe’, Slieve Croob in Co Down. The large mountain in the south is ‘Sliabh gCallann’ or Slieve Gallion which is close to Cookstown and of course the mountain dominating the western view is ‘Carn Tóchair’ (Carntogher).

The natural beauty and wildlife of this ancient woodland

For the west car park, take the Tirkane Road leading north west from Maghera town centre. Continue for 3.5km, before turning right onto the Halfgayne Road. The west car park is 1km along this road on the right hand side.

Dogs are allowed but must be kept under control.

As this is a natural woodland environment, no toilet or refreshment facilities are provided.
New pathways do include a short section suitable for pushchairs and wheelchairs. 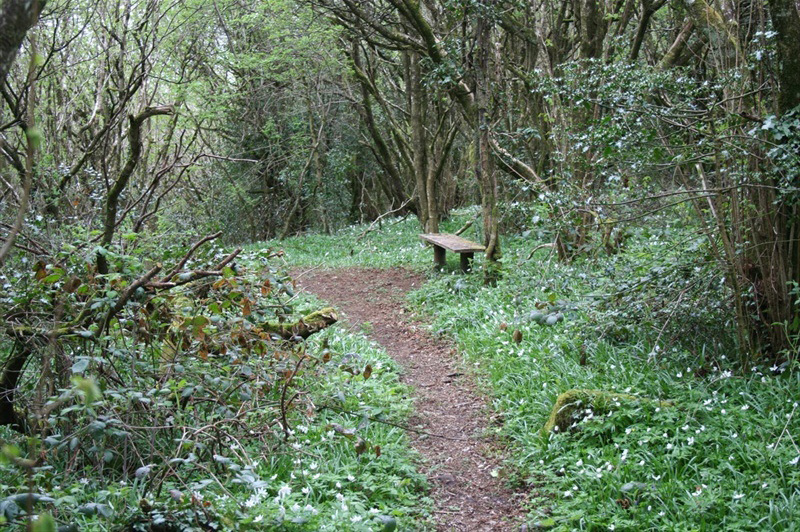