The Broad Water is a 3 mile (4.8km) towpath walk between Moira Railway Station and Aghalee and takes you along the route of the original Lagan Canal through Soldierstown. Keep an eye out for the large variety of breeding and wintering wildfowl.

Since the canal was officially abandoned in 1954 the banks have become overgrown and an array of colour is provided by a variety of trees, shrubs and wild flowers. Moira is unique as being the only town in Ireland to straddle two counties, County Down and County Armagh

The Broad Water is a man made feature, built in a natural valley in order to retain a sufficient head of water to accommodate the navigation. Take a seat and enjoy the sights and sounds of nature, set against the background of a thin belt of mature woodland!

Begin walking from the entrance located in the car park of Moira Railway Station. Passing under the bridge that carries the railway line which was built in 1833, stop to have a look at the unusual “skew brickwork” used to add strength to the bridge and how the strain of the tow rope cut notches in the iron guard at the foot of the bridge. Further along after passing the car park and picnic tables at Soldierstown Car Park you come to a large expanse of water, known as the Broad Water. Look out for the Soldierstown Church up on your left, where the engineer responsible for the Lisburn-Lough Neagh section of the canal, Richard Owen, was buried in 1830. On reaching the top end of the main Broad Water you will see the former bank-ranger’s house however this is now privately owned. The final part of the walk will take you into the Village of Aghalee.

For those who wish to continue their journey towards Lisburn, then you can either take the train from Moira Railway Station or simply follow small country back roads, joining the towpath of the Lagan Valley Regional Park at Union Locks, Blaris Road, Lisburn.

A pedestrian entrance to the Broad Water is available from the car of Moira Railway Station, Station Rd, Moira. A car park, picnic tables and link to the towpath are located at Soldierstown Car Park on the Soldierstown Road approximately midway between the villages of Moira and Aghalee. In addition the route can also be accessed in Aghalee Village from Soldierstown Road. 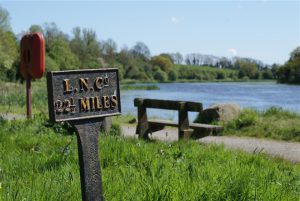 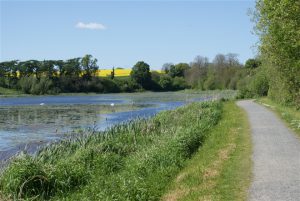