(One review) on “Ballykelly Bank”

Lough Foyle is a sheltered haven on the Atlantic coast, a refuge for sailors, wintering birds, breeding seals and walkers. This is an inspiring off-road, level walk, for most of its length alongside a freshwater pond with reed beds and the expanse of Lough Foyle the other side of the sea wall!

From the car park, walk across the bridge and follow the gravel track to the left, following the river a short distance until you come to where it meets Lough Foyle. Depending on tide levels, you will see various waders and wildfowl (including Brent Geese in winter) feeding on the mudflats at the river mouth.

Here, the track turns sharp right and runs between the ‘back pond’ or ‘back cuts’ that drains the reclaimed land (much of it lying at or below sea level) and the grassy bank that abuts the sea wall.

Part of a concrete runway can be seen across the fields. This was the once strategically important RAF Ballykelly. Modern commercial aeroplanes cross these skies today, bound for the City of Derry airport to the east.

The track continues for two miles (three km) until it comes to the Burnfoot River which rises on Loughermore mountain to the south.

Being a linear walk you will have to retrace your steps to the start point! On the outward leg Binevenagh’s cliffs provide a starkly enticing backdrop while the rounded distant slopes of the Sperrins will prove a delight on the return. All the while, the tide is on the move on the other side.

There is also an option to extend this walk please see the Lough Foyle Trail for more details.

This walk can be enjoyed whatever the weather – but come suitably attired and be prepared for a change in the weather! The track is well surfaced and any sensible footwear should suffice. There are no picnic facilities or benches along the route and you should bring a flask, a groundsheet or blanket, and some snacks if you plan to take your time to savour the landscape, seascape and wildlife of this beautiful area.

GENERAL INFORMATION ON THE AREA

The lands along the eastern shore of Lough Foyle are largely flat, a relict of prehistoric times when sea level was much higher and waves washed across the raised beaches visible today. Land reclamation schemes on the Foyle have resulted in many acres of land at or below sea level being brought into arable production, protected by sea walls and pump houses.

To the west, across the waters of the Foyle, lie the Donegal hills of Inishowen while the stepped basalt cliffs of Binevenagh dominate the northern skyline. To the southeast are the more rounded Sperrin Mountains, the source of the River Roe with its estuary north of Ballykelly. This river is famed in angling circles for catches of brown trout, sea trout and salmon. Indeed, the Foyle system, of which the Roe is only one of many rivers, is one of the most important salmon river systems in Europe with thousands of salmon passing through the narrows at Magilligan Point each year, pouring out of the north Atlantic and surging towards their spawning grounds in gravel streams high in the hills of Donegal, Tyrone and Londonderry.

The strategic import of this area on the edge of western Europe came to the fore in the Second World War! These level lands (ideal sites for air force bases) and the natural harbour that is the Foyle (a prime shelter for convoys and escort ships waiting to cross the Atlantic) became the major focus for waging the Battle of the Atlantic – just how instrumental in winning this battle is emphasised by the selection of Lisahally, at the mouth of the River Foyle, as the point to which the German U-boat fleet reported to surrender in 1945.

THINGS TO SEE ON THE WALK

This walk offers an interesting insight into the engineering obstacles of land reclamation! The walker may have views on the impact of reclamation on the environment, the possibly negative effect of flooding of upstream and adjacent unprotected land and other associated issues. However, these lands were reclaimed long ago and some bird species have since adapted well, utilising the grasslands as roosting and feeding sites, particularly when the tide covers the muds and sands on the bed of the nearby lough.

The result of the efforts of the engineers and navvies of times ago are thousands of acres of good arable land and security for the rail line that runs across what was once shallow sea.

Occasionally pop up (carefully!) on to the flood bank and discretely look over the sea wall to scan for birds and the occasional seal and otter. Remember that Lough Foyle is a rich shellfish fishery and the food laden waters that are feeding the mussels and oysters also supports substantial stocks of fish, such as flounder, and sustains thousands of wading birds, ducks, geese and swans.

Keep an eye too for birds and mammal on the backpond drain that runs close to the track. This body of water receives drainage water seeping from the low lying land that it edges. A pump house steadily works to ‘lift’ the water and discharge it into the sea lough on the other side of the sea wall.

The Little Egret, an extremely rare bird in these parts, has been sighted feeding here. Wading birds such as Redshank, Snipe, Oystercatcher and Lapwing are plentiful, resident breeding populations being augmented in winter by cousins seeking refuge from the extremes of the continental winter! Look out for large flocks of sea and estuary birds wheeling across the winter sky, continuously on the move as the tide encroaches on their feeding grounds on the mudflats, forcing them to flit to roosts on open water, field and marsh.

You will likely find otter spraints as you walk along and – if you are particularly fortunate – you may actually see an otter.

The railway line running just inland is the Belfast to Derry line. Planning a route for this rail link was one of the reasons why the sea wall was built and land reclaimed – that and the attraction of ‘creating’ many acres of fertile, level land!

In June 1941 a Royal Air Force base was established at Ballykelly and the concrete runway and some of the original buildings can be seen across the fields from the walk. RAF Ballykelly was one of four wartime airfields in this area, the other three being at Limavady, Maydown (both now industrial complexes) and Eglinton (now the location for the City of Derry Airport). During the Second World War aeroplanes flew from these airfields to conduct anti-submarine patrols over the Atlantic Ocean and to escort shipping convoys. By the end of the war, Ballykelly-based squadrons had been responsible for sinking no fewer than twelve U-boats, sharing with other aircraft and surface ships in the destruction of several others, and damaging many more.

The Ballykelly base continued to be used by the RAF after the war and in 1962 it accommodated some Royal Navy personnel and was known by them as HMS Sealion. In recent times it became an army base (Shackelton Barracks), due to close in 2008.

On the Londonderry/ Derry side of Ballykelly. Turn on to Station Rd, a minor road that runs northwest off the A2. After about 1km, cross rail track by the level crossing and park adjacent to the bridge over Ballykelly River.

Dogs must be kept under close control 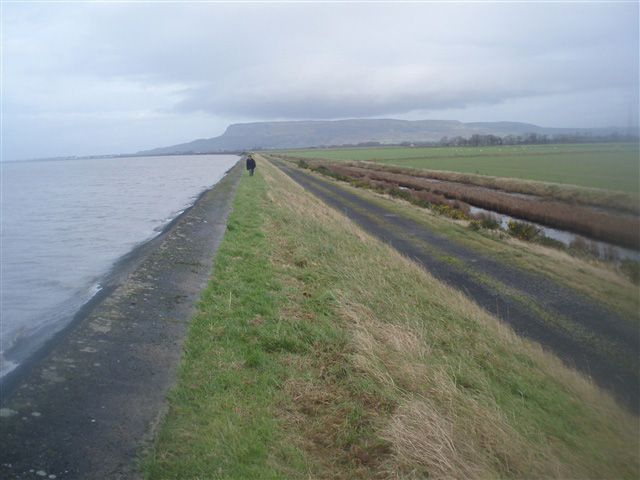 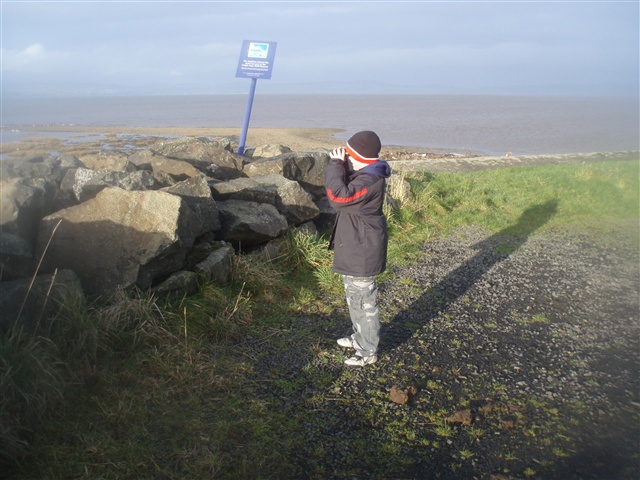 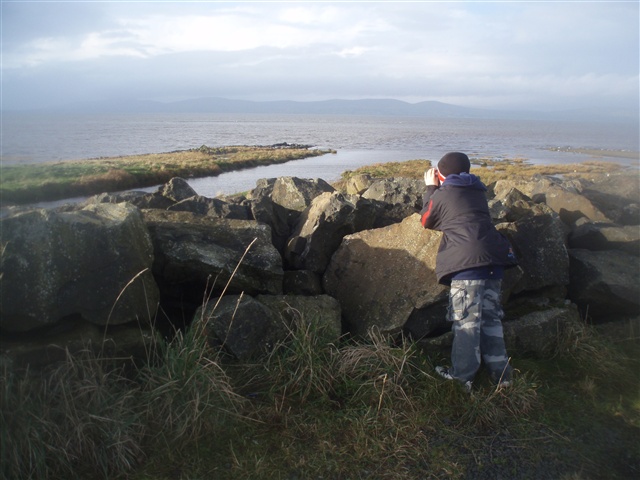 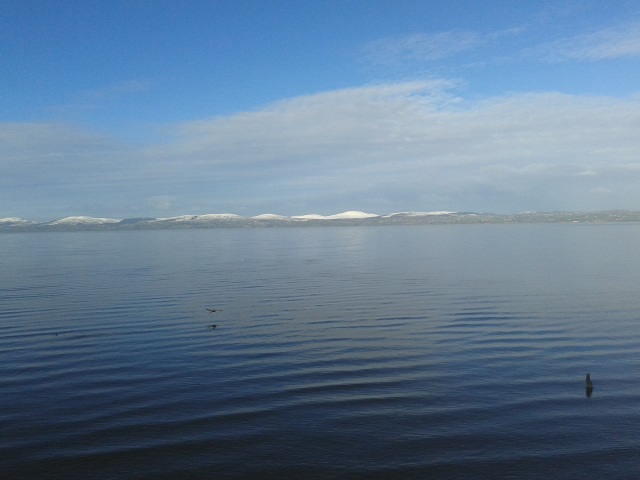 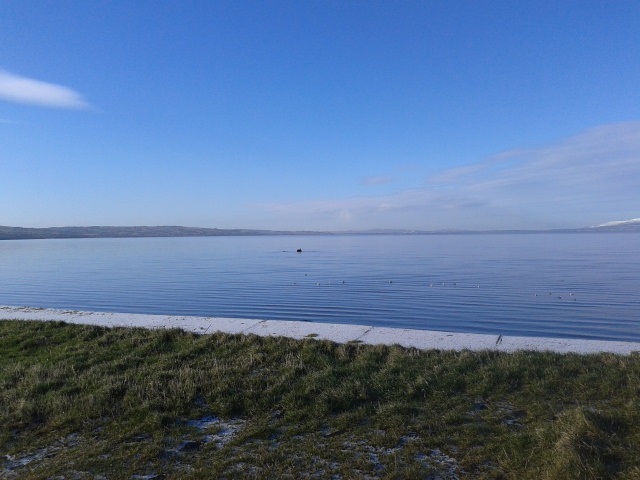