(One review) on “An Creagán, Forest and River Trail”

An Creagán Forest & River Trail provides a safe and friendly place to enjoy your daily exercise and de-stress in a uniquely tranquil and picturesque environment.

This walk is part of the Highway to Health Scheme – a simple and innovative scheme which aims to encourage people of all ages to walk for leisure and good health. It uses pole signs at one kilometre intervals on an established route.

As you approach An Creagán visitor complex turn left and walk up the slope between the large stones at the beginning of the route. As you come to the brow of this incline you will have a view to your left across a 22 acre (9 hectare) remnant of the once much larger Creggan Bog. This is small piece of undeveloped raised bog which is home to unique colonies of plants including 14 different types of sphagnum moss, cranberry, crowberry, bilberry and the insect eating sundews, amongst others. A gravel path leads you along the edge of this bog with a short boardwalked outshot giving you the chance to get out into the midst of this soft, peaty landscape without getting your feet wet. Continuing along the gravel path you will notice to your right the hollowed out landscape of a decommissioned gravel quarry. Closed since the 1960s it is now populated by willow and birch with a system of ponds running through the quarry floor. These are home to the protected smooth newt as well as our common frog who puts on rather a spectacle during the spawning season when they gather in their hundreds in search of a mate.

As you carry on up a further incline you will enter the marginal forest which is home to spruce and pine that have spilled over from the adjacent plantation as well as naturally seeded rowan and willow, amongst the heathers, ferns and mosses taking advantage of the damp shade. You carry on through this terrain for half a kilometre before entering the Creggan Forest along the access road. The Sitka Spruce here are planted as a commercial crop, first established in the 1940s and ‘50s to satisfy increasing demands for timber. As they come to maturity sections are felled by forest service and depending on the quality are destined for use in construction, agriculture, paper production or as fuel. As you progress along the forest road the density of planting becomes apparent with the occasional firebreak allowing light to reach the forest floor. This scrubby oasis is ideal cover for woodcock who are often stirred into noisy flight if you venture along these forest rides during the short winter evenings. Around half a kilometre into the forest you will notice the clear-felled area to the right which has started to regenerate from the seed dropped into the soil from the mature trees before they were removed. The felling allows a view across to Sawel, the highest peak of the Sperrin mountains in the distance. The occasional standing dead tree trunk provides a perch for passing raptors which include buzzards, sparrowhawks and the brown long-eared owl. A search around the base of one of these trees can reveal the leftovers of their meals in the form of pellets – the regurgitated remains of shrews, mice and small birds compacted into cigar shaped packages! Carrying on along pass this clear-felled area you will come to a cross roads.

Continue straight ahead for a further kilometre through the densest part of the forest where you will emerge to a landscape of open bogland and the sound of Glassagh Burn, draining water from the spongy landscape. Pausing here you will see a rocky outcrop known as Cashel – a name referring to it’s ancient use as a hillfort and common in place names throughout the country. The path leads round to the left following the meander of the burn and the edge of the forest to your left. The open countryside here often allows sightings of ravens with their croaky call and playful flight. Feral goats are also encountered here and throughout the Sperrins where they have successfully bred and made themselves at home. The main road will slowly come into earshot now and the path turns to take you back in an easterly direction. The forest of spruce and occasional stands of lodgepole pine is on your left and remnant bog on your right. The overgrown remains of turf banks can be seen scattered throughout the bog given away only by the straight lines of heather plants and the slight change in level of the ground – evidence of a past use for this land and the skill of hand cutting turf which is nigh extinct. The mounded banks of peat along the edge of this path are home to massive colonies of the insect eating sundew plant whose sticky secretions can be seen glistening in the summer sun, just waiting to catch some ill-fated prey. The bog cotton and bog asphodel dwell here also, providing seasonal interest to the walker. The common lizard can often be seen from the path here, basking on the sun warmed turf. You will come to a left-hand bend now which takes you away from the main road and back into the forest where you will shortly return to the cross-roads encountered earlier. Take right here to retrace your steps back to the marginal, scrubby forest. When you come to a fork take left which will return you towards the visitor centre by an alternative route. At the next junction take another right followed shortly by a left which will take you through the middle of the old gravel quarry. You will emerge in An Creagán community garden area passing the play park and duck pond before coming to the courtyard of the visitor complex and back to the carpark where you began your journey.

See the range and variety of the habitat, visitor centre

Park at An Creagán Visitor Centre 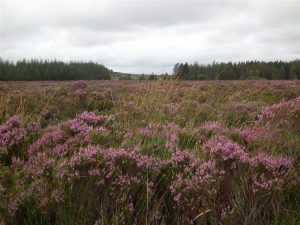 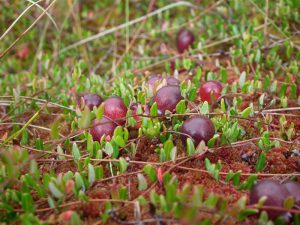 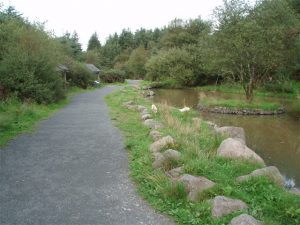 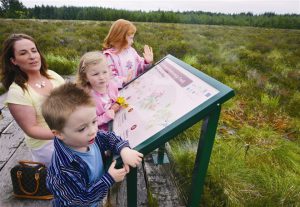