A moderate linear walk linking Trassey Track and Bloody Bridge via the Brandy Pad, taking in sights such as the Mourne Wall, the Castles, Slieve Commedagh and Slieve Donard.

A more challenging alternative route is an option, by summiting Slievenaglogh and Slieve Commedagh, then following the Brandy Pad to Bloody Bridge.

Turn left out of Trassey car park. Approx 50m ahead you will see double gates and a stone stile at the start of Trassey Track. Continue up this quarry track passing though another 2 sets of double gates, both of which have a kissing gate. The panorama of the mountains will open up in front of you. The path becomes increasingly steeper as it follows the Trassey River. Look up to your right to see the crags of Spellack which are popular with climbers. Continue up Trassey Track and ascend to Hare’s Gap, the col between Slievenaglogh and Slieve Bernagh. Cross the Mourne Wall using the stile or gate and bear left, picking up a well worn track (the Brandy Pad) which is much flatter. Continue along the Brandy Pad for 3 km where you will pass under Slievenaglogh, Slieve Corragh and Slieve Commedagh, the second highest peak in the Mournes. Stone steps will help you ascend the section of the Brandy Pad leading up to the col between Slieve Beg and Slieve Commedagh. At the obvious cairn on the col bear left passing under the craggy outcrops of the Castles on your left. Continue along the main path which traverses around the base of Slieve Donard to meet the wall at the Bog of Donard. Cross over the Mourne Wall and follow the obvious track down following the Bloody Bridge River. At the quarry, cross over the Bloody Bridge River and continue along the well used quarry track. After a pronounced zig zag in the path, take the track to the left towards the Bloody Bridge River. Cross the Bloody Bridge River using conveniently located boulders. Follow the river downstream, crossing a stile and a wooden footbridge across the Glenfofanny River. Continue following the river towards the coast and turn left when you reach the Ballagh Road. Bloody Bridge car park is 20m away on the opposite side of the road.

The walk starts at Trassey car park. To get here follow the Hilltown Road out of Bryansford for 2.9 km, turn left at the junction with Trassey Road and continue for 1.3 km, Trassey car park is on the left hand side. 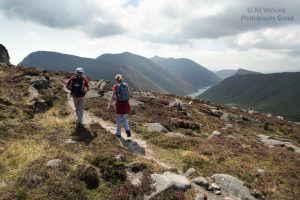 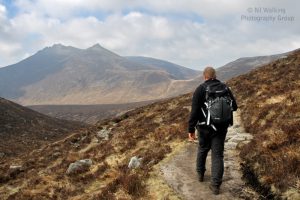 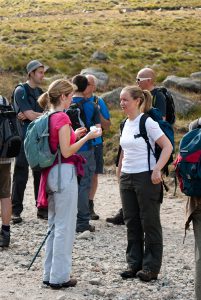 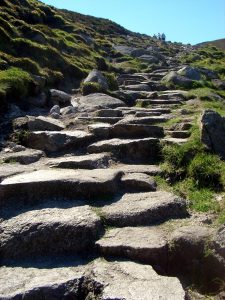