The Hare’s Gap is the most dramatic mountain pass in the Mournes. Its sharply defined outline indicates that ice once passed this way; using the Gap’s convenient north-south alignment to advance and retreat over the entire Mournes range. In more recent times the Hare’s Gap marked the exit point for smuggled goods which had crossed the hills from the coast along the Brandy Pad. The contraband (which included soap, leather, spices and coffee) was carried through the mountains on the backs of small ponies which descended by the Hare’s Gap to the valley of the Trassey River and on to Hilltown (a favourite distribution centre). Nowadays, the Gap’s easily reached central location on the rim of the High Mournes makes it a popular starting point for routes scaling adjoining peaks, or simply for a walk along the gentle contours of the Brandy Pad.

Walk left from the car park entrance to reach a combined gate and stile marking the start of the Trassey Track (75m).

PLEASE USE THE STILE AND KEEP THE GATE CLOSED.

Cross two further stiles to arrive at the forest edge and the beginning of open mountainside (1km). Beyond the third stile the track continues 1.5km to a ford.

Threading its way uphill, the track approaches the Trassey River along the left hand side. At this point the cliffs of Spellack, the north-east shoulder of Slieve Meelmore flank the opposite bank of the river.

Spellack is reputed to owe its present form to the erosive power of glaciers which swept across an older rock face to leave the granite cliffs freshly steepened. Today its sheer precipices provide challenging rock-climbs.

A point just short of the ford provides a comprehensive view of Slieve Bearnagh: seen here between its neighbouring peaks of Slievenaglogh and Slieve Meelmore, from which the cols at Hare’s Gap and Pollaphuca separate it. Slieve Bearnagh is one of the most picturesque Mourne summits with its combination of height (739m), crags, summit tors and smooth rock slabs.

The mechanised quarry workings on Bearnagh’s north face stem from a temporary post-war revival in the demand for foundation blocks and monumental stone.

Cross the river and continue 100m to a ‘Y’ junction. Follow the level left fork (right fork climbs to the quarry) and cross a second ford. From here a winding track, commencing over the bare rock pavement and then through a boulder field, leads   to the Mourne Wall at the Hare’s Gap (ca 600m).

En route, note the tell-tale wedge marks around the edges of many granite stones. Such evidence of the stone-men’s ‘plug-and-feathers’ method of cutting stone can be seen on boulders large and small throughout the Mournes. The plug (a small iron wedge) was inserted between two thin pieces of steel (feathers) to split the stone along a line of roughly-prepared holes.

From the Hare’s Gap a range of routes can be followed, exploring in a number of directions:

Right – a stiff climb leads up Slieve Bearnagh, considered by some to be the grandest of all Mourne summits.

Left – a continuation of the walk follows the Brandy Pad, passing beneath the Diamond Rocks (in 500m) on the side of Commedagh, great weathered granite pillars – likened to a ‘Giant’s Causeway’ high in the mountains.

Whichever option is taken, the views from Bearnagh and along the Brandy Pad are spectacular.

To complete your walk, retrace your steps back to the start.

The walk begins from the council car park along Trassey Road at the northern foot of Clonachullion Hill. 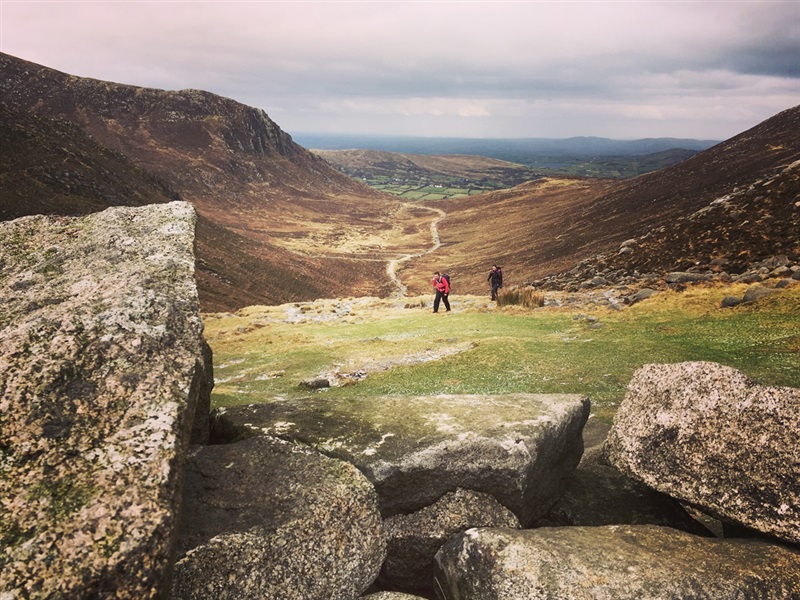 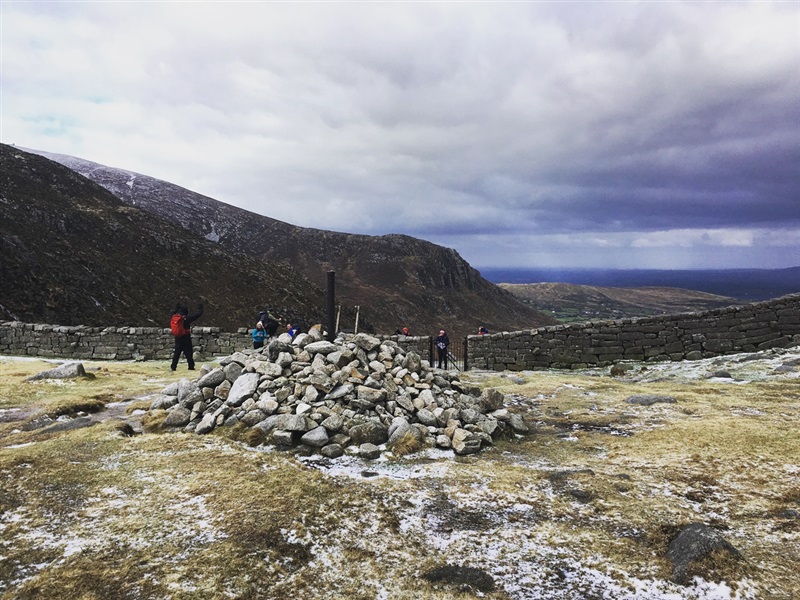 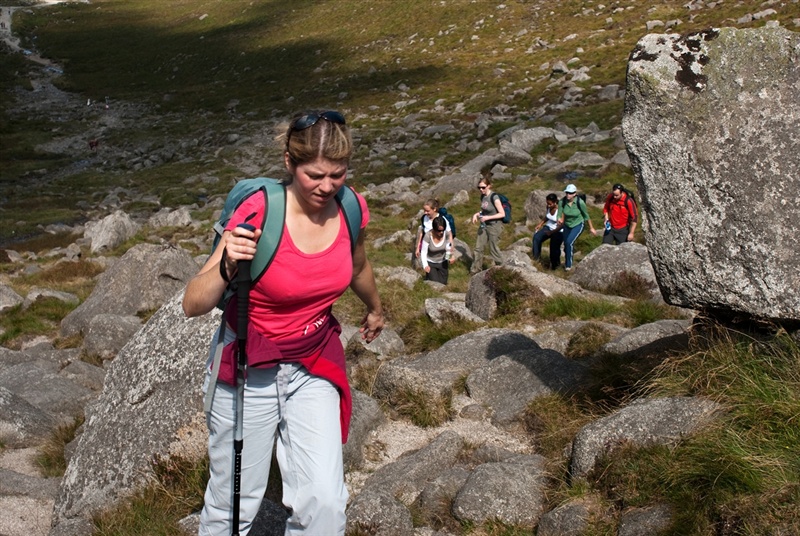 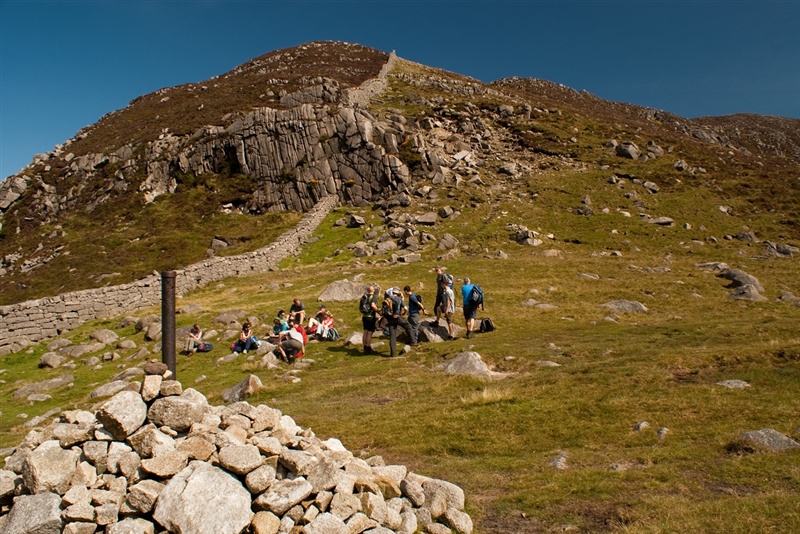 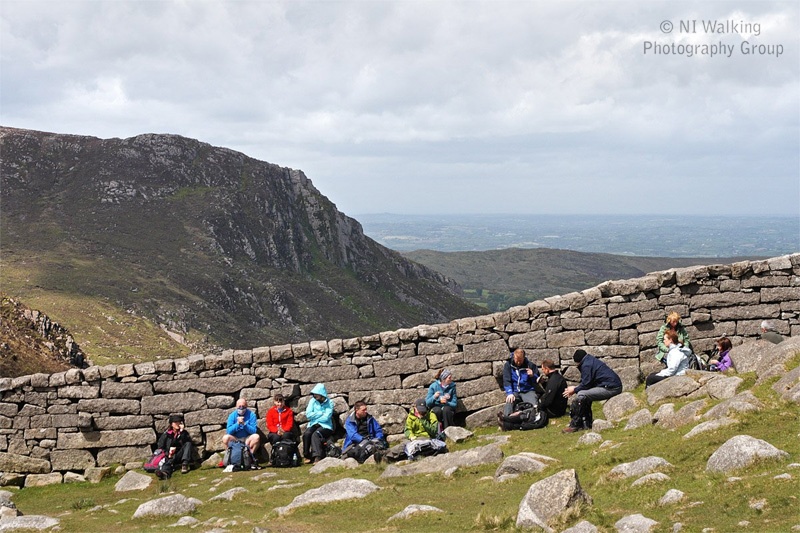 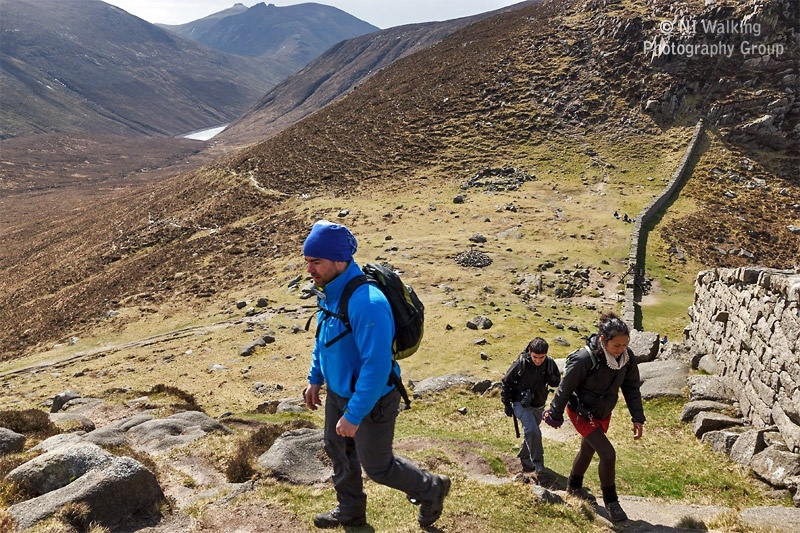 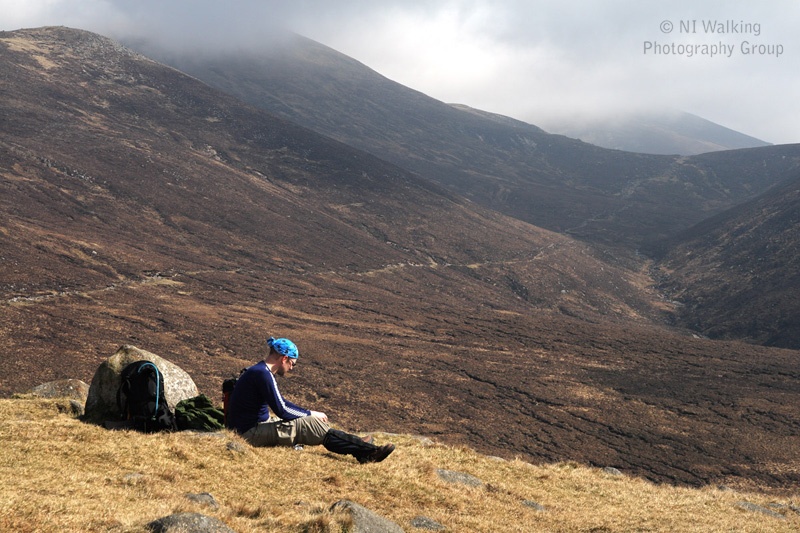